Normally I’d put something like this in a monthly music post but of course, my queen deserves a post all all of her own. She released her latest album on February 8th and I for one wanna talk about it – thank u, next – let’s go. 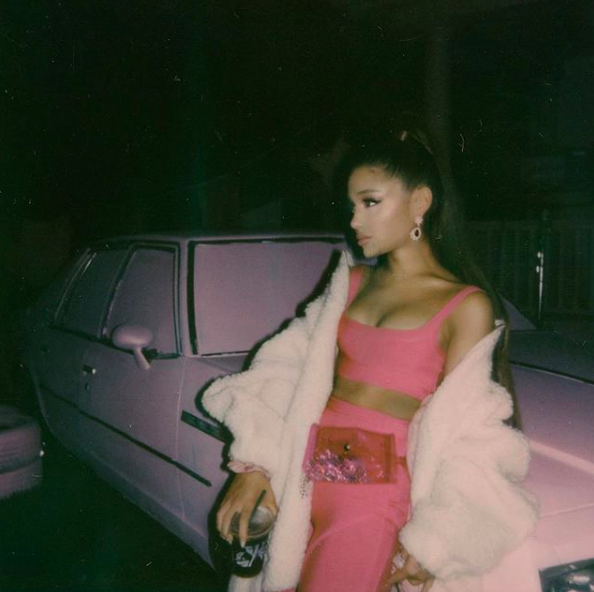 For some (wild) reason this seems to be everyone’s least favourite on the album, but it’s actually the one I love the most. The second I heard it I just really loved the sound of it, it’s very low and reminds me of almost being caught in a rainstorm in a black and white movie, but not in a romantic way. I’m not sure, it’s hard to describe. It reminds me of dark skies and you know…bad ideas. I really love the vibe of it. I will say though, I’m not a huge fan of the last minute of the song once Ari’s stopped singing (I usually skip that part).

“I’ve been outta sight, I’ve been worried ’bout you lately. Runnin’ out of time, wishing you would come & save me.”

The second I heard this all I could think was Rihanna Rihanna Rihanna. One of my favourite Rihanna songs is Watch n’ Learn and this instantly reminded me of that, it’s like this was Rihanna’s song and she gave it to Ari (obviously she didn’t) but it has the biggest Rihanna vibes and I absolutely love it – it’s so playful and fun. Unfortunately the song is only 2 minutes and 20 seconds long and I wish there was more of it – if it was longer it would’ve been first on the list but unfortunately due to the shortness (pls Ari make an extended version) it makes second on the list.

“No eyeliner on but looking at you is the fix, highlight of my life just like that Fenty Beauty kit.”

I wasn’t sure whether to put this or needy third but I feel as though I reach for this song more if I’m flicking through the album, it’s such a bop !! I love the fact Nonna starts the song off talking about a damn hearing aid even though you wouldn’t guess it in a million years since it fits in with the song so well. I love Ari’s voice in this cause it’s it’s almost kind of scratchy ?? Again, it’s hard to explain unless you listen to it but her voice sounds really hoarse in this one which is literally the best thing I’ve ever heard.

I forget about needy more than I should so I don’t play it as often as I’d like (I’m starting to now though) but I love it so much, it’s one I always sing along to and do all the hand gestures to so when I’m in the car people probably think I’m crazy but yanno, you gotta do what you gotta do. Honestly this is such a beautiful song and the chorus always gets stuck in my head, I love it.

“Imma scream and shout for what I love, passionate but I don’t give no fucks, I’ll admit that I’m a lil messed up, but I can hide it when I’m all dressed up.”

This song is so raw, beautiful and honest. I’m glad Scooter didn’t let her take it off the album because I feel like it needed to be here. I feel like this is one of those things so open and emotional that not even the most judgemental person in the world could find a word to comment on it, this whole song is just free of judgement and it’s floating. That’s all.

“Though I wish he were here instead, don’t want that living in your head, he just comes to visit me when I’m dreaming every now and then.”

I lovelovelovelove this song so much and I feel like had she released it at the same time as the rest of the album rather than earlier as a single, it’d probably be my number one on the list. Right now it’s at that stage where there’s not a single person in the world who doesn’t know about it so it’s lost it’s lil bit of magic to me because it’s not as fresh anymore and I’ve heard it 2490484984 times but I still love it all the same and when it comes on shuffle I don’t skip !! Which is a big deal. Normally when a song has been played 934234032 times I’m literally like thank u next when I hear it but I actually still listen to this one when it comes on which must show how much I love it. It is one of the best things she’s ever created.

“Plus I met someone else, we havin’ better discussions. I know they say I move on too fast but this one gon’ last, ’cause her name is Ari, and I’m so good with that.”

“I’d rather be alone tonight, you can say ‘I love you’ through the phone tonight.”

This is probably going to sound like utter rubbish but because of how close Ari is with her fans and how long I’ve personally followed her and loved her, it feels like we know each other and so when I listen to her songs, it’s like I’m listening to a friend. Because of how close and open she is with us I feel everything that she feels and I’m able to see the song for what it really is because I know who she is as a person, and this song is actually really sad. When I hear it I can hear the hopelessness in her voice because she’s basically asking the question of “Why can’t you imagine a world where this could be us? Why won’t you allow that to happen?” It’s sad but beautiful and I’m so grateful she shares herself like this with us, because it’s the whole reason we’re able to appreciate the music for what it really is. Thank you for another beautiful masterpiece Ari.

“Tell me your secrets, all of the creep shit, that’s how I know it’s true. Baby direct it, name in the credits like the movies do.”

Do you know how empowering it is to say “fuckuhh fake smile” in the softest yet most powerful voice you have? Listen to this and then you will.

“I know it’s the light that I chose, but baby I’m grateful I want you to know. I’m happy for the love and all of the above, if I’m being honest I done been through way too much.”

If I could have this song as the chorus on repeat 80 times over I’d be a happy girl. I feel like a lot of people can relate to the theme of this song also, I know I definitely can. Making up versions of people in my head is literally what I do best.

“Look at you, boy I invented you. Gucci tennis shoes runnin’ from your issues.”

break up with your girlfriend, i’m bored

This song is along the same lines as 7 rings and apparently I’m not so into that type of sound so unfortunately this one is also at the bottom of the list (but I still love it !! Just not as much as the rest).

“I know it ain’t right but I don’t care, break up with your girlfriend ’cause I’m bored.”

I like 7 rings but…nowhere near as much as I love the other songs on this album and I never voluntarily choose to listen to it (I’m sorry Ari ily) so unfortunately, it’s last on the list. It took me some time before I started to catch onto it but nonetheless it’s still a bop because it’s impossible for Ari to make a bad song.

“Look at my neck, look at my jet, ain’t got enough money to pay me respect.”