This book has been on my to-buy list for the longest time now because the cover is simply just so gorgeous. When it arrived I literally devoured the whole thing in 2 days and really loved it.

This book follows our main character Emoni, a high school senior with a young daughter who’s trying to balance all of the struggles of being a teenager and a teen mom whilst also simultaneously trying to chase and achieve her dreams. Despite the title of this book it did not for one second occur to me that this book was about cooking but I absolutely loved it and I think it’s actually the first chef / cooking themed book I’ve read, which is crazy now that I think about it – it’s not really a trope I see very much!

Oh…my God. Is all I can say about this book. This book was the most unreal thing I’ve ever read.

This book follows sisters Celie and Nettie, two African-American women who are growing up in rural Georgia in the 1930s. They are separated when they are young and we read the book through the two writing letters to each other and sharing what has become of them and their lives – though neither actually receive any of the letters that have been written.

This book deals with a lot of trauma – emotional and sexual abuse, racism etc. so please be mindful of that before reading. Despite the book being so full of these things, I found it to be absolutely, breathtakingly beautiful. This is the story of survivors and beautiful souls. I loved the characters so much (minus of course, the awful ones) but even then, Alice Walker’s ability to actually characterise these people was just absolutely perfect. Celie is now one of if not my favourite character ever, I just wanted to grab that woman up in my arms and say I love you and I care about you. I wanted to give her the world.

There’s really no way for me to describe this book other than for me to just tell you to read it, it was just absolutely perfect. This does not by any means mean that it was sunshine and rainbows, but the storyline and characters were just a masterpiece. I absolutely fell in love with this book and I don’t know what to do with myself because of it. I was obsessed with Celie, she was written so, so brilliantly. The only downside for me was that I found some of Nettie’s passages a little boring sometimes however, I think that was just purely because I loved Celie so much and wanted to get back to hearing her part of the story straight away. This book is a masterpiece and I really, really want to watch the movie.

This story follows our main character Korede, whose sister Ayoola is essentially, a serial killer. Ayoola is absolutely beautiful and therefore gets a lot of free passes because of her beauty, one of them being essentially, getting away with murder.

Ayoola has men falling at her feet, she dates them and then they mysteriously end up dying to which she always claims self defence and well, she gets away with it because who wouldn’t believe such a beautiful, innocent young woman?

Korede of course, knows that none of this is true. Whenever her sister “accidentally” kills her next victim, Korede is always the first person on the scene to help clean up the mess, as she couldn’t bear to ever hand her sister in or reveal the truth.

One day, Ayoola sets eyes on a Dr that works at Korede’s surgery, a man that Korede has been secretly in love with for as long as she can remember. Knowing what will happen once the two start dating, we find out where Korede’s loyalties really lie, but which person will she choose to save?

This book was really good, such a fast read, I’m pretty sure I got through it in an afternoon, and I really loved it. Not to mention the cover is gorgeous. I don’t really feel like there’s much I can say about it since I essentially just gave a whole summary above but all I can say is I really enjoyed it and for how short it was, everyone should read it!

I had high hopes for this book and well, it kind of turned out to be just a bit…meh.

This story follows a schoolgirl called Pippa, who, for her end of year class project chooses to re-look into a local murder that took place 5 years ago of another schoolgirl, Andie Bell. The police convicted her boyfriend at the time, Sal Singh, of the murder, but Pippa isn’t so convinced.

I think this was all a little bit too young for me, and I think that as someone who’s very analytical and has an eye for detail…this just wasn’t it. I found it a little predictable, i.e. things that happened then gave away other things straight away and I was like oh, no suspense then?

It was also very convenient and very unrealistic. A schoolgirl breaking into houses, people giving up very crucial information easily and agreeing to speak about things which apparently the police couldn’t do, getting an important drug dealer’s number from a guy by taking a picture when he wasn’t looking (I would expand more on this point but honestly looking back on my notes I can’t even remember what I was talking about which shows how memorable this book was for me).

This very dangerous drug dealer then letting a random schoolgirl into his house to allow himself to be questioned about his involvement in a murder??? It would never happen. Then he doesn’t let Pip leave until she deletes the photos of him drug dealing on his phone – she deletes the photos, he takes one quick look at the screen and he’s like “ok you can go” which is so unrealistic and also, deleted items folder ?? iCloud backup ?? Hello ?? She kept putting herself in these unrealistic risky situations yet there were no repercussions for it.

Here are my notes of me just listing off unrealistic happenings that ruin this book and make no sense:

Everyone is rating this book 5 stars but maybe I’ve watched too many crime documentaries to not be like…that would never happen. I had really high hopes for this book but it was just too unrealistic and therefore annoying and so yeah, it didn’t really work for me. The actual story itself was fine which is why I gave it 3 stars, but the attention to detail was just…not it. However, I understand this is YA and not the likes of I don’t know, a Stephen King novel. 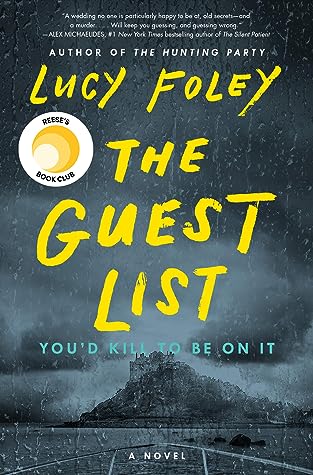 What a load of rubbish this book was!

This book is set from the POVs of 5 people – the bride, the plus one, the best man, the wedding planner and the bridesmaid. Essentially two mildly famous people – Will and Julia – are getting married, and we follow them over the course of their wedding on a -spooky deserted island- that they’ve hired out especially for their special day, and basically someone turns up dead at the end of it and it’s a whole – whodunnit – kind of theme.

The character development in this was shocking, I didn’t care at all about a single one of the characters, they could’ve all fallen into the deep dark sea and drowned for the amount I cared. The men in this were unbearable which, I assume (and hope) was Foley’s intention but wow, they were so unbearable to the point where I didn’t even want to keep reading because I hated them that much. They were all so weird ?? They kept talking about their old school days even though these guys were literally 40 years old at this point but it was written as if they were still in school, these men did not shut up about it. I wasn’t sure how many more chapters of reading the same utter twaddle I could take.

There was essentially nothing good about this book, I just didn’t care at all. The point of it was to be this scary, mysterious murder plot but in actual fact it was just super super slow, I hated the men and didn’t care about the characters and I just don’t think it was written or developed very well, it’s a no from me.

As mentioned in previous review posts, I’m trying to make my way through all of Emily Carpenter’s work (as of writing this I have currently done so) and this is just another book in the list.

In this book we follow Meg Ashley, the daughter of her worldwide famous one hit wonder of an author mother who, when she was a young girl wrote a horror book based on a true story that basically took over the world. Meg knows however, that all is not what it seems and, having a rocky relationship with her mother anyway, decides to become “independent” and get revenge by agreeing to write a tell-all book about what it was really like growing up as the daughter of someone so famous.

This book was okay, there was nothing wrong with it but it was just…okay. It didn’t make me feel like I wanted to give it 3 stars, basically, and there’s other books of hers that I’ve previously rated 3 stars and I don’t think this one was as good as those hence the 2 star rating. There’s not much else to say!

Oh how I love this series.

This is the second book in the Truly Devious trilogy and this honestly has to be my favourite series ever. The series as a whole is 5 star for me yet I only rate the books 3 stars each time which even I don’t understand however, I think it’s because they’re not particularly life changing or historical, literary masterpieces however, they are so enjoyable and fun to read and I’m absolutely obsessed with them, so even though I’ve so far rated the books 3 stars, just know that the series is a big fat 5 stars for me. I love it. Each time I finish one of the books, I can’t stop thinking about it and am literally itching to get my hands on the next one. I’m not really a series person which I wish I was because I love the idea of owning and reading all of the books within a series however, I’ve just never found one that really interests me – Truly Devious is the exception. Obsessed. Chef’s kiss.

And there we have it loves – let me know if you’ve read any of these and what you thought!